The Community Exchange Network was the first global network of communities using alternative exchange systems, and remains by far the largest.

Currently there are three CES servers hosting the CES communities: CES Global, hosting most communities, one in Taiwan and one in Australia. A Spanish system, IntegralCES, and Geneva-based CommunityForge.net are also part of the network.

One of the most important features of the CES is that it permits inter-trading between trading communities wherever they are in the world.

The CES is in fact a global network of communities using non-monetary exchange systems. This means that the registered users of any particular CES exchange can trade with the users of any other linked exchange or compatible system.

This ability to trade globally is achieved through a unique system that allows stand-alone trading entities to trade with each other in an effortless way without having to use a common, second-level, global ‘reserve currency’.

Any direct trade with another exchange would mean a ‘gain’ or a ‘loss’ and this would upset the zero balance on both sides.

The solution is virtual users. Each exchange has a single virtual user that operates as would a single human user with an account in every exchange. This virtual user buys and sells within an exchange and then ‘carries over’ the goods and services to other exchanges and buys and sells them there. Instead of using human ‘middelmen’ CES uses ‘virtual users’, who for all intents and purposes operate the same as human users. They do not require a commission however! 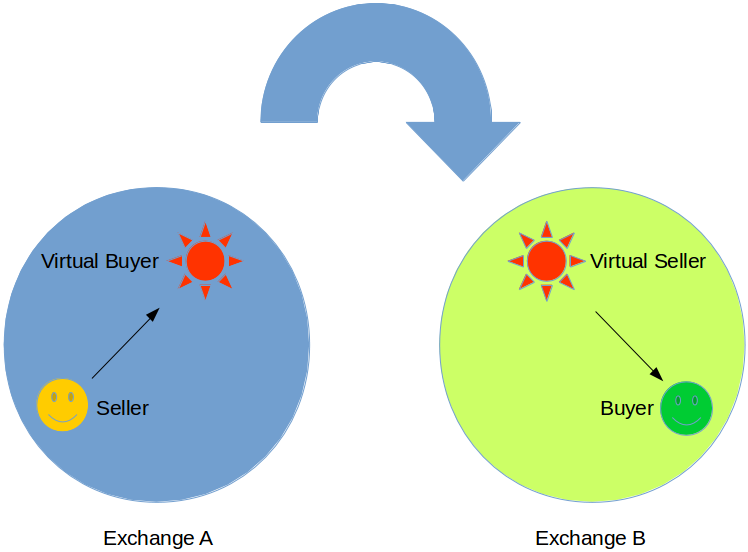 In reality this is not a two-stage process as described here because the programming enters the transaction records for Exchange A and Exchange B at the same time. The user entering the transaction does so in the same way as if the transaction was local. It operates completely seamlessly without the users being aware of the process involved.

If the units of account/value differ between Exchange A and Exchange B a conversion rate is applied to the amounts that are entered on each side. Let’s say the unit of value/account in Exchange B is worth half what it is in Exchange A. This means the conversion rate between A and B is 1:2. If the Real Seller is credited 100 Units for the sale, the Real Buyer will be debited 200 Units for the purchase. Follow the accounting below to see how this works:

Trading with exchanges hosted on other servers and systems

Currently this is achieved by using a third-party server called Clearing Central. This operates as a centralised ‘bridging server’ that connects servers and systems into a broad network. 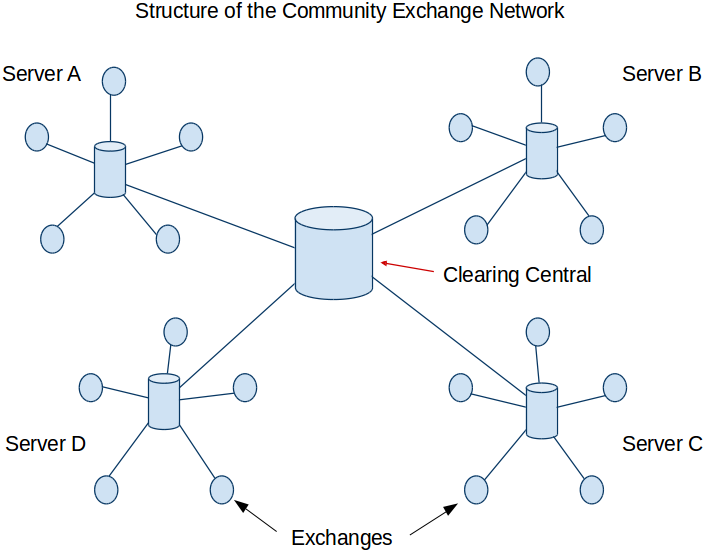